Posted on November 30, 2019 by mylittlefarmintown

Thanksgiving dinner is always easier to prepare the second day!

Posted on November 28, 2019 by mylittlefarmintown

Posted on November 5, 2019 by mylittlefarmintown 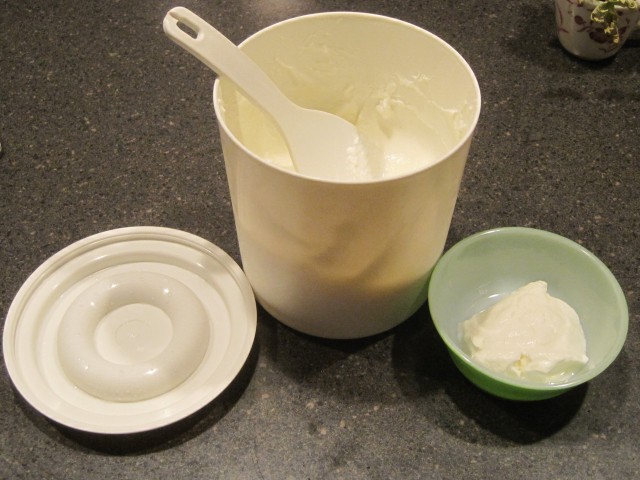 I finally gave up on my old yogurt makers from the 1970s. They were five-container Saltons I’d picked up at garage sales during the back-to-the-land era. Sometimes I would get good yogurt from them and sometimes I didn’t–mostly at the end I just didn’t!

I started to look around for a new yogurt maker and found one “new” in the box with a new unopened thermometer and a muslin bag for straining yogurt into cheese at my local St. Vincent de Paul store for about $13.

I’m hooked on Greek-style yogurt and make it thick and mild from whole milk and a single half-cup serving of plain yogurt from the dairy aisle at the local grocery store. I mainly eat it with fruit and granola with a drizzle of honey and a few tablespoons of sliced almonds on top–Breakfast of Champions!

My new yogurt maker works very nicely, and I’ve fine-tuned just how to get the thickest Greek yogurt without straining it or adding gelatin or milk solids (I let it come to a boil. It’s often a mess, but it works for me.)

Until I discovered my boiling method, I had a few “failures.” The worst one was a batch that I couldn’t even strain into a thicker product. I couldn’t bear to pour 2 quarts of it down the drain (which would have been the acme of foolishness anyway)!

I ended up using my soupy yogurt a couple of different ways–mainly as a substitute for buttermilk in cooking our Saturday morning pancakes. I also used it to make a fruit lassi drink in the Vitamix to go with some chicken tikka I made for supper one evening.

If you are getting used to a new yogurt maker, don’t throw away your failures.

Posted in Cooking and Food Preservation, Make It Yourself | Tagged 1970s back to the land, cooking with yogurt, DIY yogurt, don't throw away your mistakes, homemade greek yogurt, odds and ends, thick yogurt, thrifty cooking, uses for soupy yogurt, what to do with soupy yogurt, yogurt makers, yogurt making methods | 5 Comments